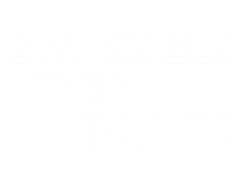 "Brussels En route" is part of a photographic search for a description of this city. Brussels is a metropolis and at the same time a "Hamlet in a swamp". However, do not expect unambiguous statements or an all-encompassing definition for this urban collection of 19 municipalities that is neither my motive nor the ultimate goal of my journey.

What do these scenes tell us about this city and our society? For years, that question kept popping up in my mind. During an everyday metro trip on April 21, 2010, a man on a unicycle rode into a metro carriage. The idea became an image. The journey truly began in October 2016. For a year and a half, I travelled through the entire city with every bus, tram, and metro line at least once, from terminal to terminal. 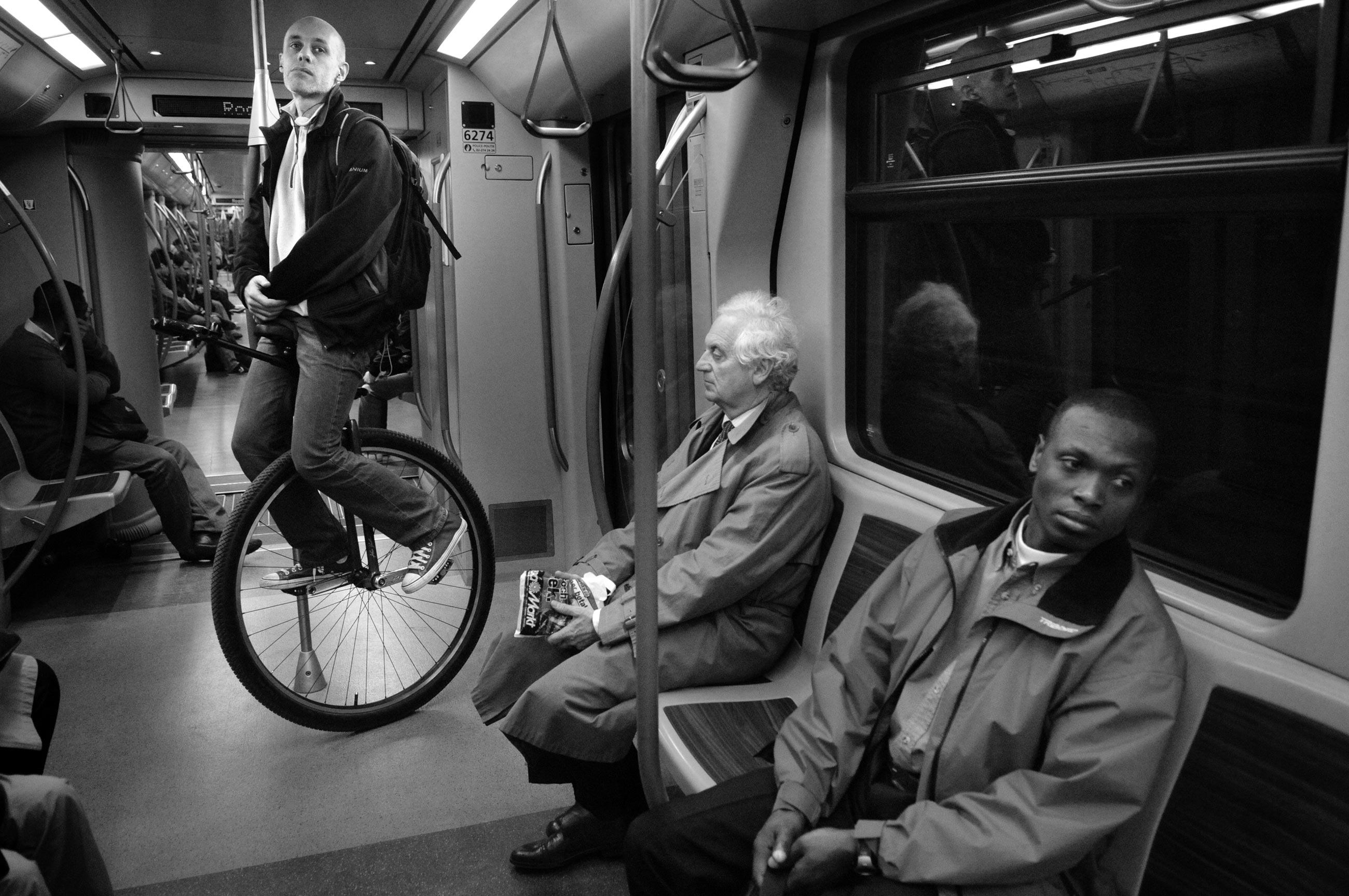 This journey has left a lasting impression, certain situations and images are forever etched in my memory. The mundane isn't ordinary, the best proof is this memorable one and a half year ride. 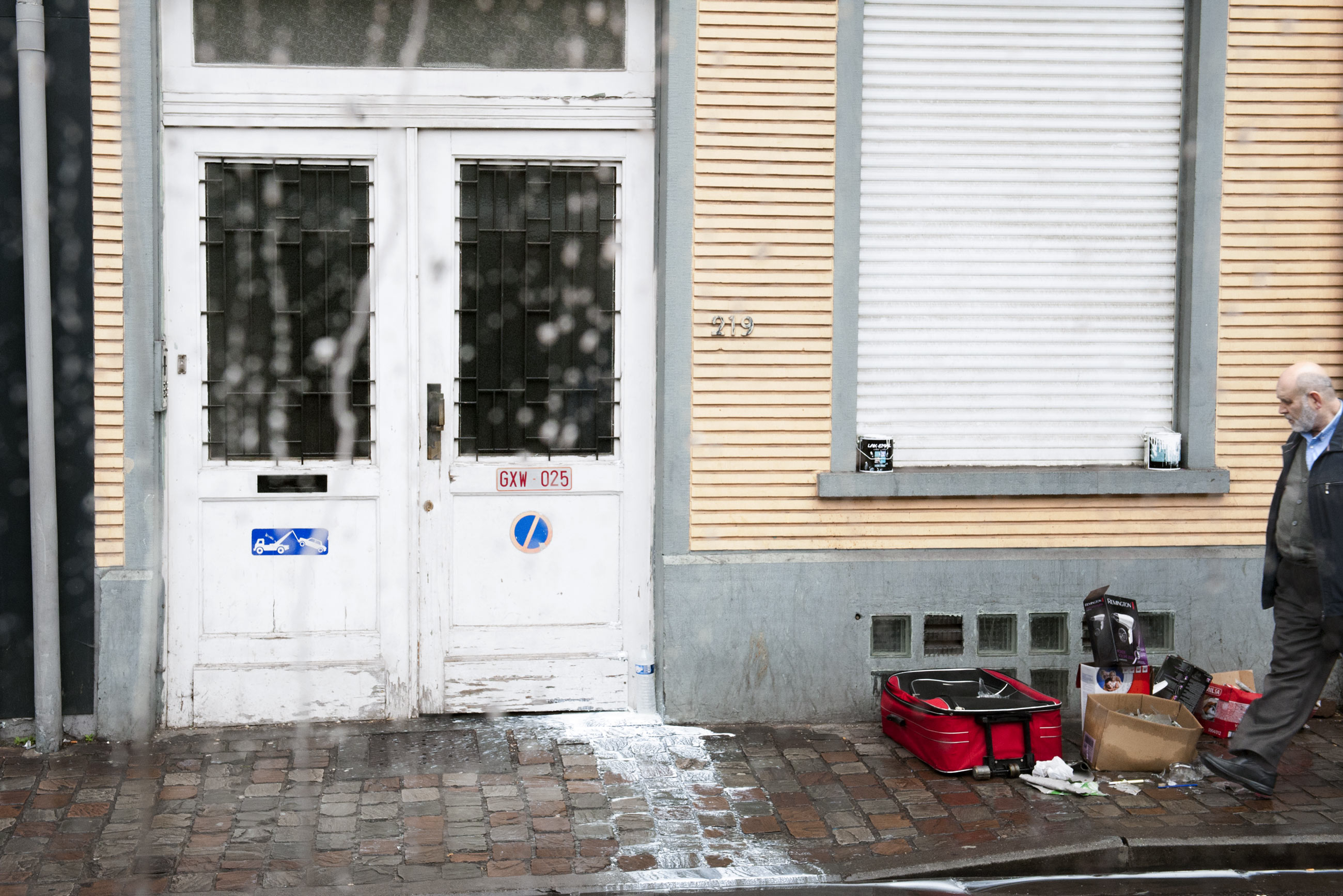 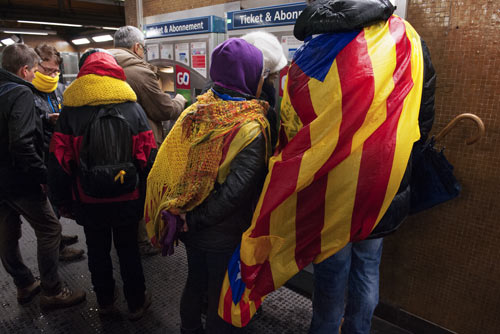 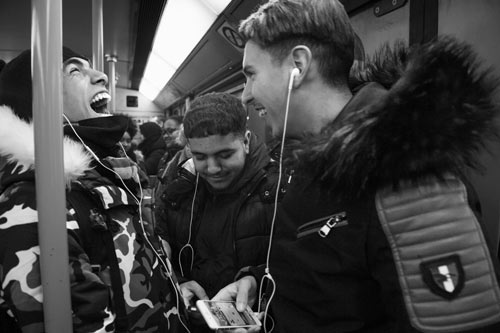 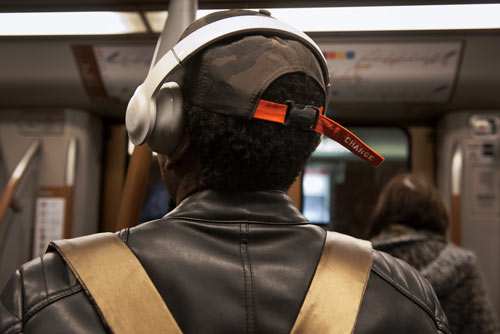 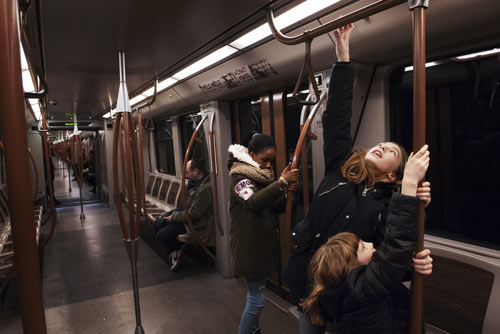 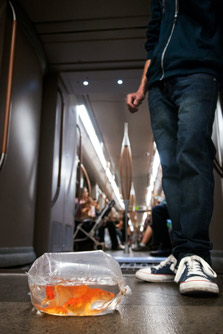 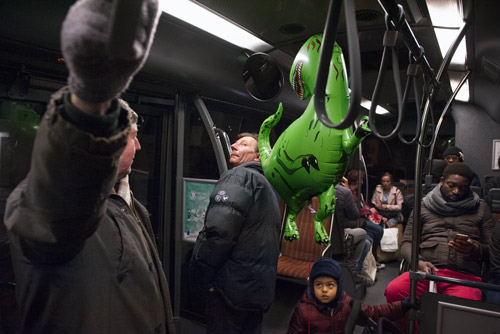 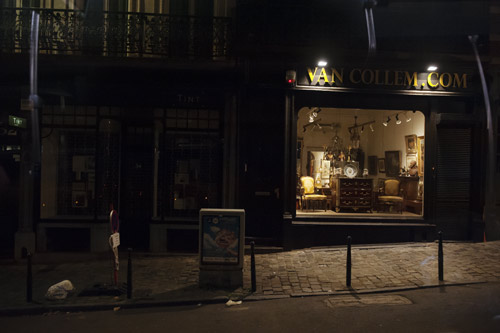 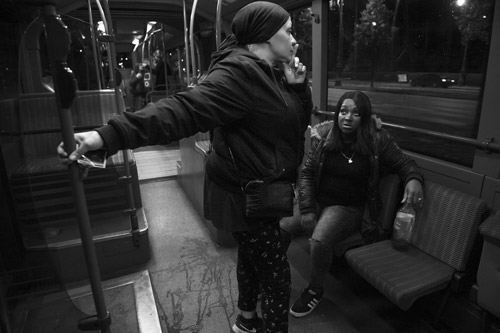 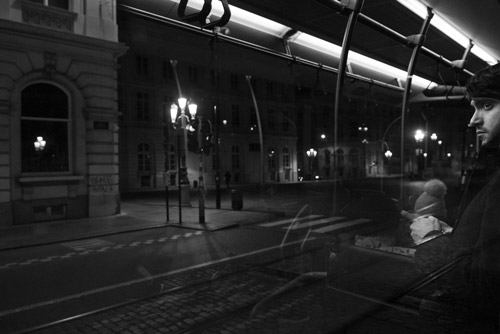 THE TRAVELLER...
...Is a blanket term for a very heterogeneous group of people: wallflower and eccentric, fashionista and Muslima, early bird and night owl, helicopter parent and business woman, expat and Brusseleer, man and woman, cis, trans, and nonbinary. Without realising, these and countless other people cross our paths every day. Often we can only guess what a person is really like. Even when a small puzzle piece of information reaches our ears, they mostly remain a mystery, a blank canvas tthat fills our imagination. 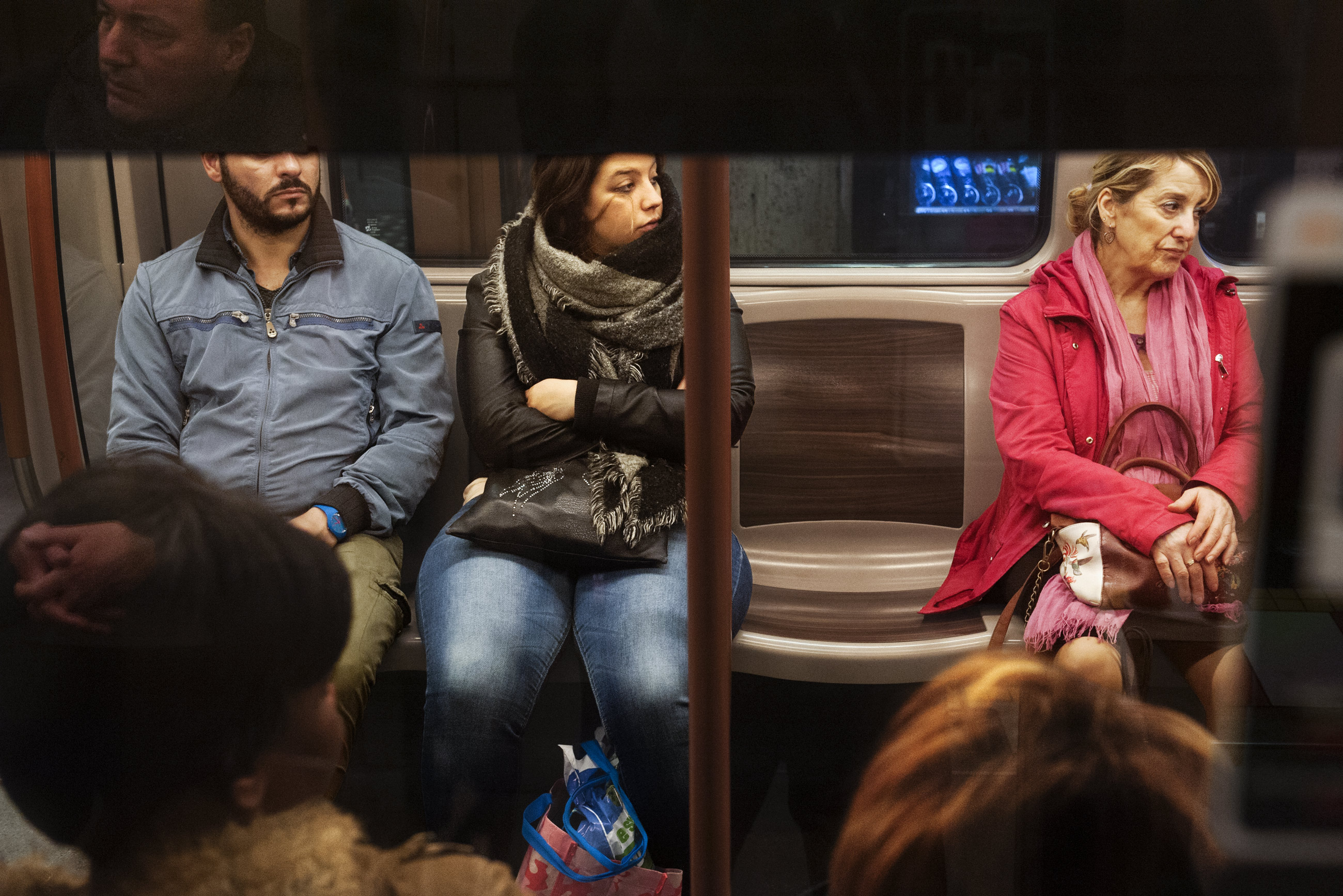 THE JOURNEY...
...is the trip through a cross-section of the city. The scenery is constantly changing, past neighbourhoods full of gaudy villas, grey blocks of apartment buildings, and stately manor houses. The traveller is treated to a mishmash of architectural styles and people, a ‘sight-seeing tour’ worthy of its name. Each time you come to a to a stop short scenes can be seen around the bus or tram. At first sight, these everyday situations may seem ordinary. But nothing could be further from the truth. This collection of fragmentary images gives the viewer a look into the daily life of this metropolis. 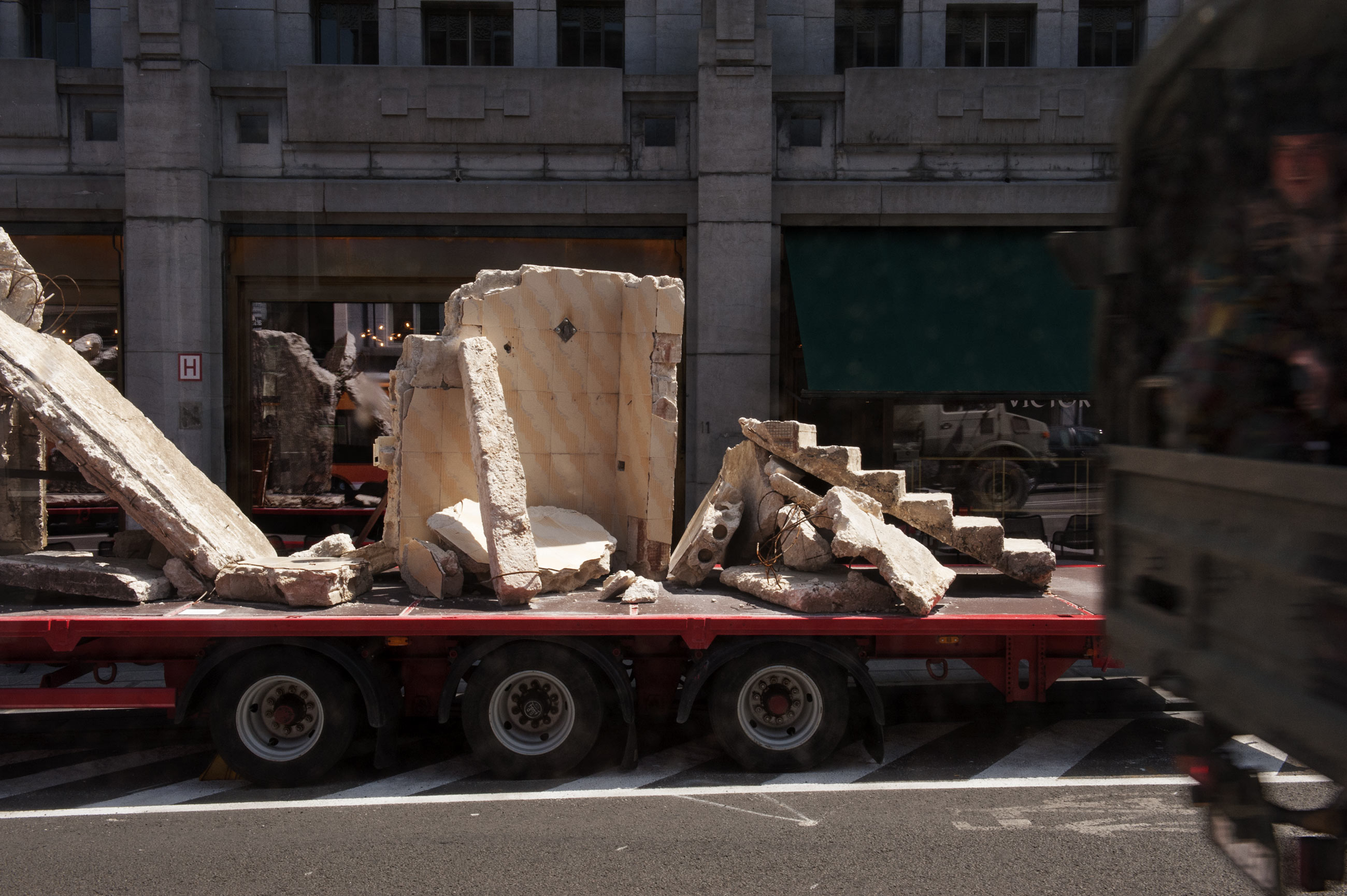 THE DRIVER...
...pilot their vehicle past impatient and honking cars, many of them demanding their place in the traffic jam. My respect for these men and women has only increased. All too often, they are unfairly used as a wailing wall. At all times, they must remain calm to navigate through traffic. They all share the same wish, which can be reduced to a single phrase: ‘Good day’. To them, this simple greeting is a term of recognition, but for some of us, it’s apparently too complex to pronounce. 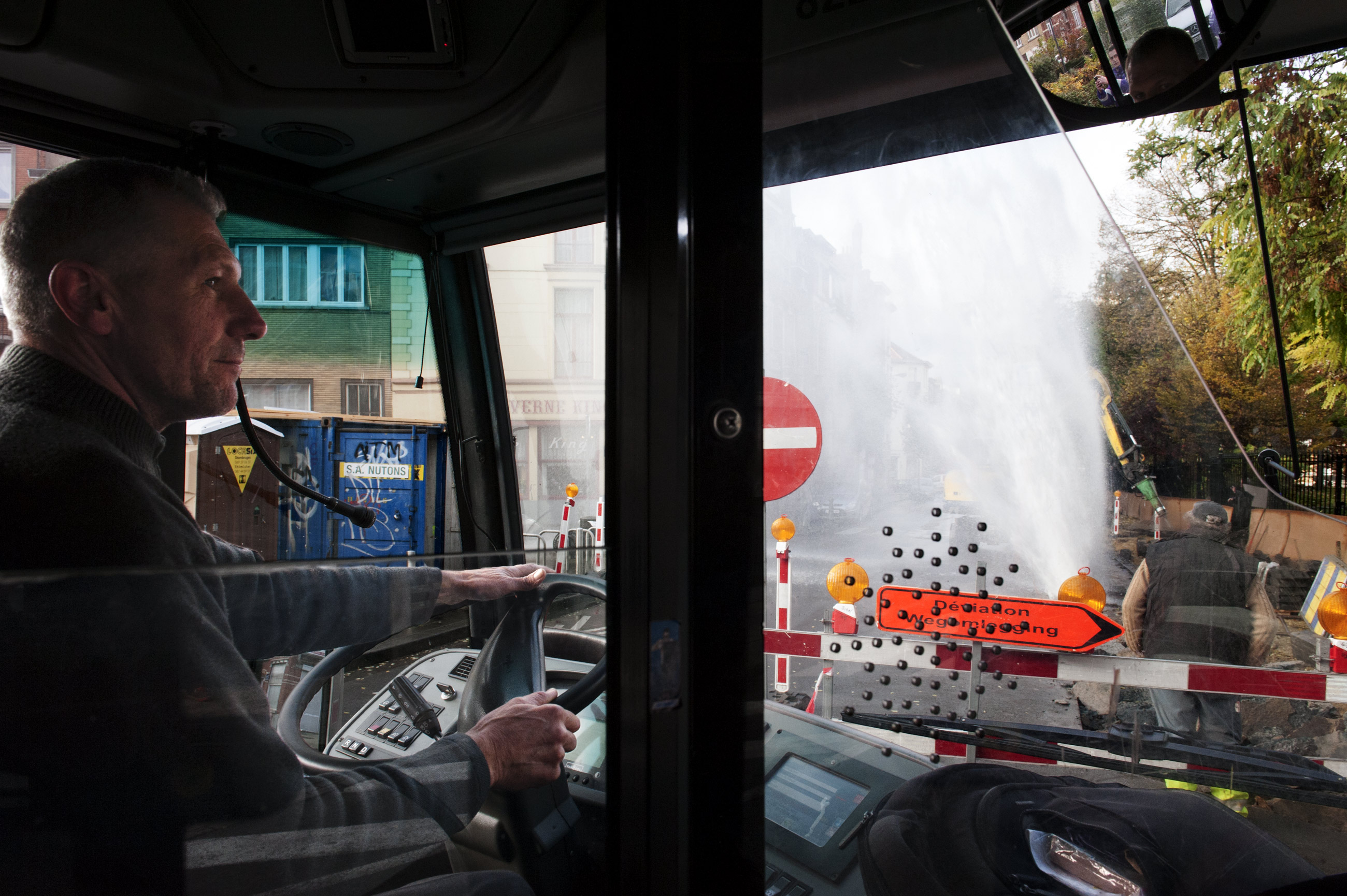 THE STOP...
...is more than just the starting or end point of a journey. Men and women who have fallen upon hard times use stops to seek heat and change. After school, the stops are flooded with hordes of exuberant youths. The majority of them disappear before their home front makes its obligate ‘where are you now?’ phone call. They are replaced by workers, hurrying home. This raging river of commuters later dries up into just a trickle. In the early morning light, this colourful collection will once again take hold of the stop 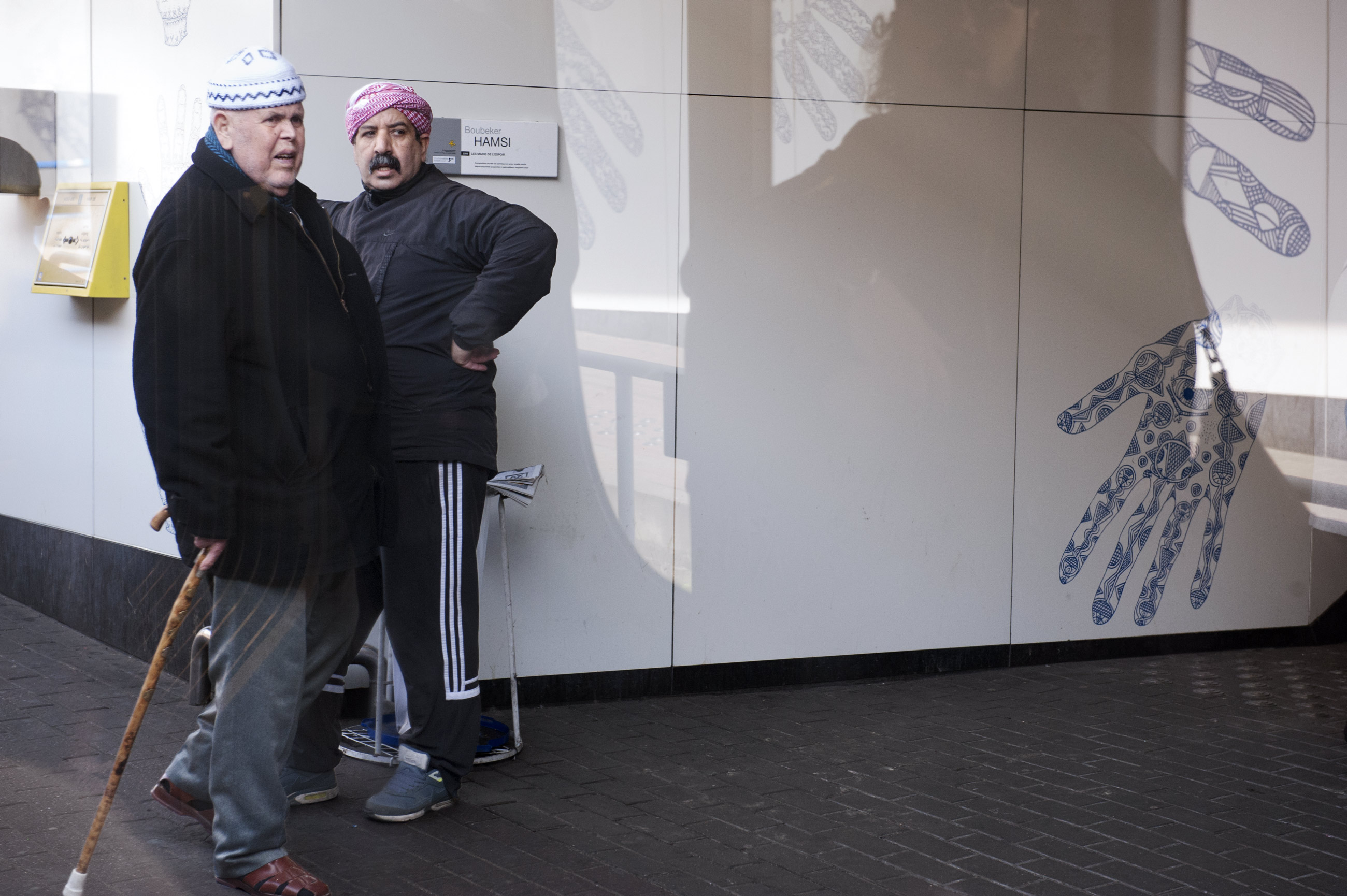 22/03/2016...
...One spring morning in 2016, Brussels unwillingly became the focus of the world news. In the departure hall of the airport, and an hour later in the subway tunnel near Maelbeek station, three suicide terrorists set off their bombs. 32 passengers had their most important possession stripped away: their lives. 340 others were rushed to the hospital with severe injuries. The shock wave of horror and grief shattered what would have been an ordinary morning. The whole city seemed to hold its breath, the deafening silence only punctured by the sounds of sirens.

Countless of inhabitants of Brussels shared their feelings of horror and disbelief, no matter their age, religion, or background. Flowers and personal messages covered the stairs of the old stock exchange building at the Place de la Bourse.While the scars will stay, Brussels is a resilient city.

The next day, the metro cars rolled out again. The flowers on the steps of the old stock exchange building were taken to be composted, the personal messages went to the city archives. Maelbeek metro station is just one of the metrostations. But this dark day will always be etched into our collective memory. 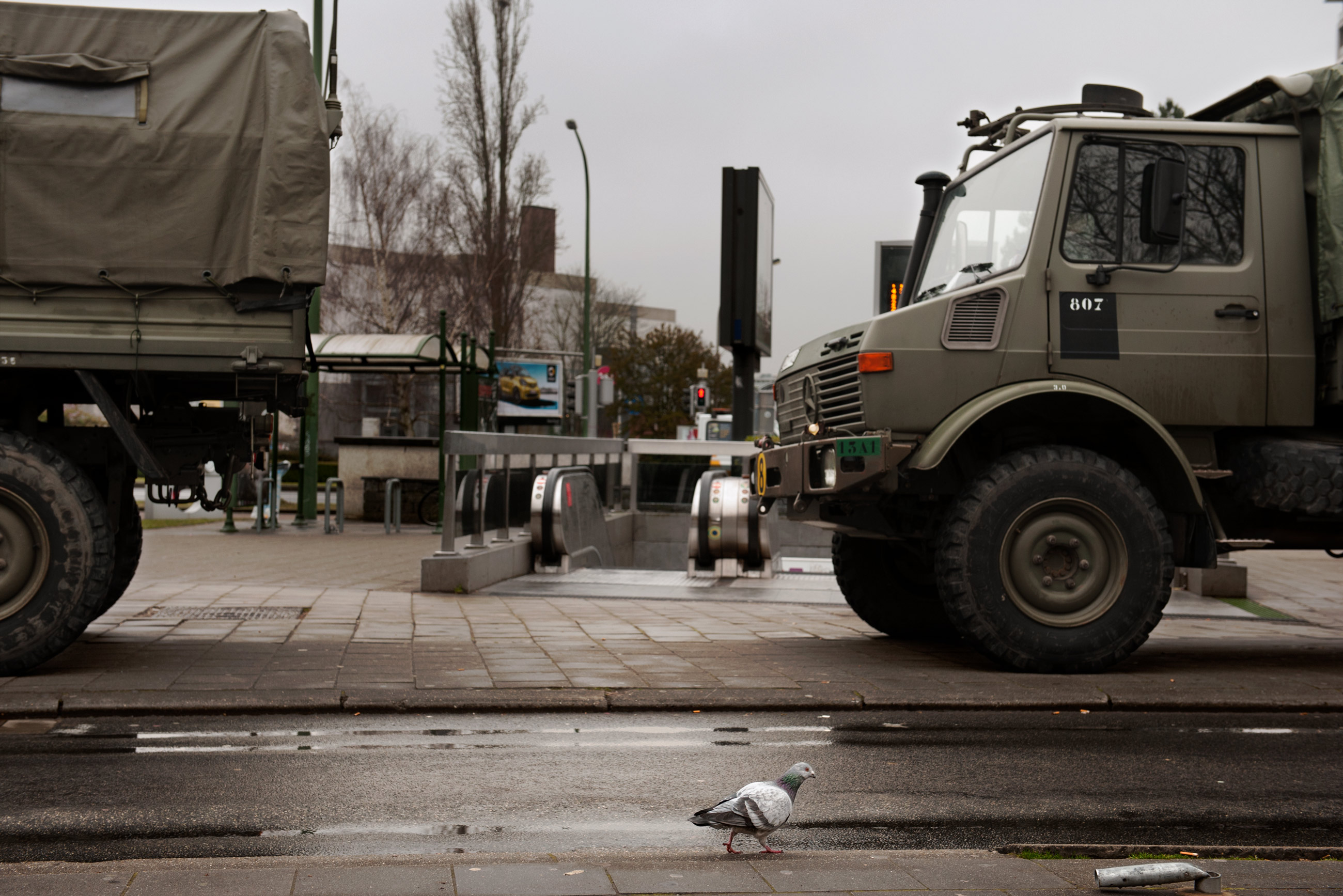 TERMINAL?
This journey nears its end, but the terminal hasn’t been reached quite yet. While Brussels was by no means unfamiliar to me, I feel like I’ve rediscovered the city through these many journeys. The bustling metropolis is constantly moving, sometimes in an aimless fashion and sometimes full speed ahead. People can abhor this fickle dynamic. Especially when Kafka, Magritte, and Godot take turns at the helm. Still, I cherish the quirky nature of this city. Where mushrooms are grown in a slaughterhouse and an abandoned construction site can be turned into a swamp out of pure boredom.

I’d like to use this as a way of thanking the STIB (the Brussels Public Transit System) for granting permission. I’d also like to express my gratitude and respect to all the drivers, for the entertaining conversations as well as the occasional cup of coffee. Under the hood of public transit, a small army wages a daily battle to ensure everything runs smoothly. These welders, dispatchers, and webmasters might not have gotten their chance to shine in this series, but that doesn’t make them any less crucial. My sincerest thank you and hopefully au revoir! 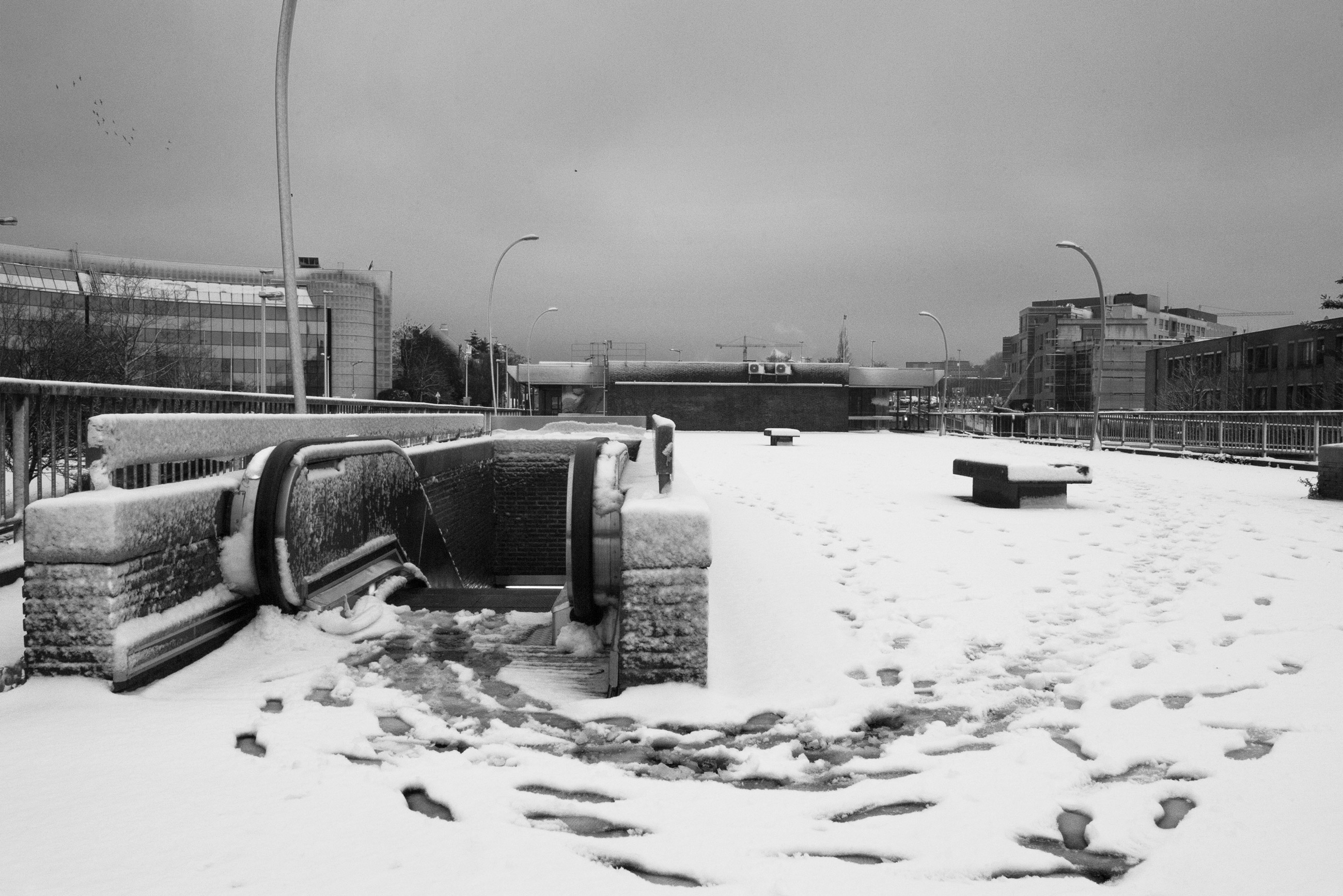 THE BOOK
The photo book is the cumulation of a year and a half journey on Brussels' public transport. The images and text in this book show a cross section of Brussels, while also managing to give a brief glimpse into the lives of the mysterious fellow passengers that cross our path every day. 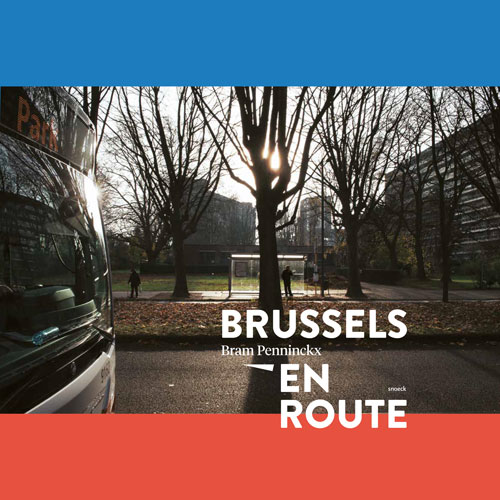 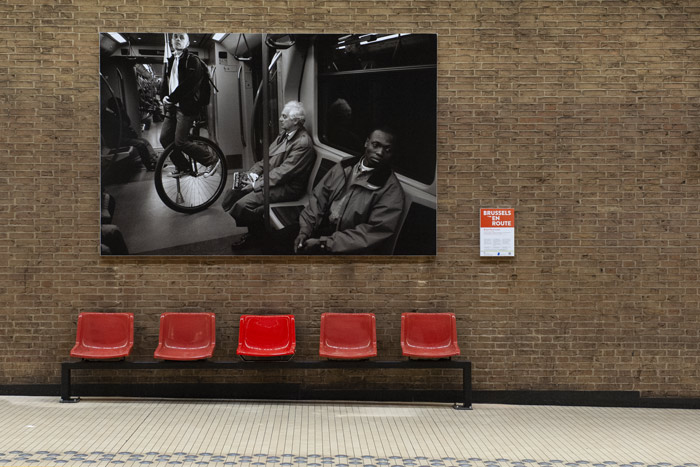 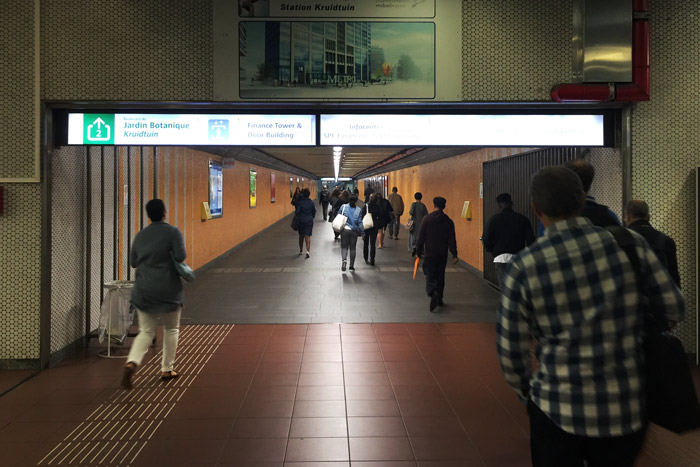 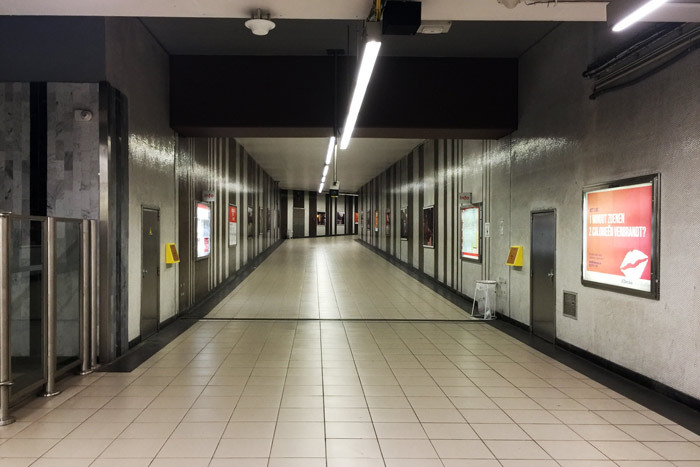 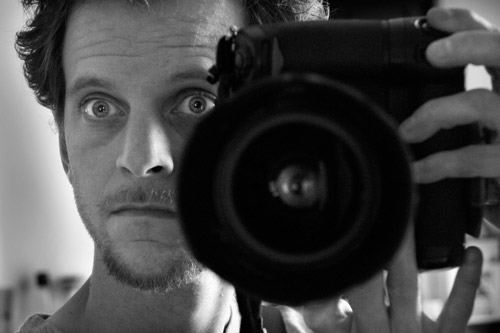